There are many Holidays around the world and while many are celebrated greatly in different countries, some are just noted on the calendar. The holiday that is special to me and is coming up is “Cinco de Mayo”. The reason this holiday is celebrated is because of the victory that Mexico had again France in May 5, 1862 which was a highly unlikely war victory due to many factors and as obvious as it might be, the Mexican culture is the one that mainly celebrates it. The reason this holiday means so much to me is because on this day, my family throws a party and we get to spend time with my friends and loved ones. We get to eat all types of Mexican food, have many types of drinks “horchata” being my favorite. This party is hosted in different places every year but that’s after we all attend the Chicago parade. This is the place where thousands of people gather up to celebrate this special day. The cars, trucks, and special carts throw all types of candy over other objects. Over all, this holiday is my favorite because its just another excuse for me to have a great time and build new happy memories. 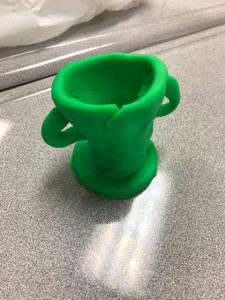 This is the sculpture I created with the Play-Doh that was assigned to me. I attempted to build a trophy and I would say it turned out better than I expected. This item/molded piece of material might just look like a regular object but the overall image it projects into my mind is far more greater in significance than any other thing in my present day life. The idea behind a trophy is it can be acquired through hard work after accomplishing a task. This item signifies success which implies the owner of it has been successful in that specific moment in their life. Success means a lot to me because i’m always striving to be the best I can be in anything I do so when I am handed a trophy, I feel as if I have accomplished something great. A classmate showed me their creation and while glancing upon what everyone else created I found that everyone had different interests and things that impacted they’re lives. Her creation was a smiley face with a tear on it presenting emotions as an essential part of her life that were valued and drives her to be the best version of herself. This activity is very similar to the writing process in a variation of ways. One of these ways is the brain storming process, you might have something planned out in your mind but when you actually spell it out and don’t like how it came out, you have to erase it and start over again. This related to the play-doh activity because I had certain image that I was attempting to create but when I molded the play-doh, I found out that I didn’t quite like what I  had created so I took it apart until I was able to successfully project my envision onto the mold. This example goes for everything, the overall structure of a piece of work might be great but adding those small changes like greater purposeful words that capture what your trying to get the reader to understand, could be the final key to making the body of words well respected. While I felt very highly about my creation I could see that my classmates also did which made me learn that priority’s are different in everyone’s life story but accomplishing them happily made us bond and learn that despite our differences, we all share similar values.

The following piece of information pertains to a subject that has begun to receive larger amounts of attention in recent years, this is the gap between gender in work spaces. During a voting tally in which more than 2 million american’s projected they’re stance on this topic, the data revealed that 75% of voters disagreed with the following statement, “Should businesses be required to have women on their board of directors?”. While 51% of the votes for the apposing side where just the answer of “no”, 21% of those votes had the reasoning of having the members that are “most qualified regardless of gender”. That was the demographic for the United States as a whole but when we transition into looking at specific parts of the voting tally regarding the unique qualities and acquired aspects of the voter’s life, we don’t really find a definite change. When comparing different races such as white who had a ratio of 25% of people agreeing with the statement to 75% apposing and black with a ratio of 28% of voters agreeing to 72% voters disagreeing, we see variations of less of a 5% difference between the races. As we move on to dependent variables that can be controlled in a person’s life, we find the different amounts of income. We find similar results between the votes of people with significantly different amounts of income. People with annual income between 25K to 50K have a ratio of 74% apposing to 26% agreeing compared to people earning over 200K, the ratio percentage wise is identical. These results show that between a whole nation, their races, and different income amounts, people think the same way.